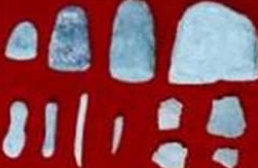 In pre-historic era, Vietnam was home to competent apes - ones of the world's earliest civilian. Archeologists found fossil teeth of competent apes in Tham Hai and Tham Khuyen Cave (Lang Son Province, Vietnam), which are dating back appoximately 200,000 years ago. Moreover, at other archeological sites such as Do Mountain (Thanh Hoa Province), Xuan Loc (Dong Nai Province), etc.

During the period of Son Vi Culture (dating back 30,000 – 11,000 years ago), the original inhabitants of Vietnam was living mainly on hunting and gathering. Archeological trails include various stone tools and fossil teeth, bones of many kinds of animals (such as wild boar, bison, monkey, and porcupine). The ancient Vietnamese stayed in large caverns, near the streams. In the late Paleolithic, the organization of tribes had been appeared, involved some families that were relative.

Right after the period of Son Vi Culture, Hoa Binh – Bac Son Culture is dating back 17,000 – 7,500 years ago; at the same time with the late Neolithic period. Working tools of residents in Hoa Binh – Bac Son Culture was improved and very diverse like stone axes and other tools from animal’s bones, shells, wood and bamboo. Although their living still depended on hunting and gathering, archeologists discovered seeds and pollen inside archeological sites. These trails indicated that the ancient civilians of Vietnam had started to do farming instead of gathering. It’s an important change marking the beginning of wet-rice civilization, which is typical for the Southeast Asian region.Archeological relics of Hoa Binh – Bac Son Culture are situated in Hoa Binh, Lang Son, Thai Nguyen, Thanh Hoa, and Nghe An Province.

Dating between the late Neolithic period and the Bronze preliminary period, Phung Nguyen Culture is considered as the link of Stone Age and Bronze Age. It’s dating about 4,000 to 3,500 years ago. In this period of time, Phung Nguyen residents had discovered the method of making pottery. Along with the development of pottery production, they found a new material: bronze. At some archeological sites on Red River Delta, scientists found the trails of human bones as well as blocks of copper and copper slag.

Existing in around 2,000 – 500 years BC, Dong Dau and Go Mun Culture witnessed the development of pottery and metallurgy techniques. In the late of Go Mun Culture, bronze tools accounted for more than 50% of working tools and weapons.

By around the 7th century BC, Dong Son Culture was formed on the base of wet-rice cultivation and bronze casting in the Ma River and Red River Delta. This was the golden age of bronze tools in Vietnam. The archeological evidences comprise many bronze weapons, tools, drums and old copper mine. In the period of Dong Son Culture, local residents had had the customs of betel-nut-chewing and teeth-blackening. Their main living is agriculture with the use of buffalo’s traction and irrigation. Besides, breeding, fishing and handy-crafts were also developed. Stone tools were completely disappeared in daily life. Nowadays, the image of bronze drums has become the symbol of Dong Son Culture.

Van Lang, the first feudal government of Vietnam was established in the period of Dong Son Culture, around 7th century BC - at the same time with Chu Dynasty in China. Van Lang Dynasty also can be...

After 900 years of independence and following a period of disunity and rebellion, the French colonial era began during the 1858-83 period, when the French seized control of the nation, dividing it...