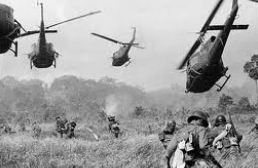 After 900 years of independence and following a period of disunity and rebellion, the French colonial era began during the 1858-83 period, when the French seized control of the nation, dividing it into three parts: The north (Tonkin), the center (Annam), and the south (Cochinchina). In 1861 France occupied Saigon, and by 1883 it had taken control of all of Vietnam as well as Laos and Cambodia.

With the assistance of French, Nguyen Anh ousted Tay Son Dynasty and became the first king of Nguyen Dynasty. In August 1858, as the order of King Napoleon III, French Navy made an attack in Da Nang Port, and then Saigon. In 1862, King Tu Duc – the 4th King of Nguyen Dynasty signed an agreement that empower the French to control three provinces in the East of Mekong River Delta. Till 1867, the French had the control over the whole of Mekong River Delta and called it Cochinchine Colony. From 1873 to 1886, with the Tonkin Campaign, France expanded its control to the Northern (Tonkin) and the Central Vietnam (Annam). In 1887, France merged three regions of Vietnam (Northern Vietnam – Tonkin, Central Vietnam – Annam, and Southern Vietnam – Cochinchina) into one and formed French Indochina. At the same time, France pronounced French protectorate in Vietnam but still remained puppet feudal government of Nguyen Dynasty. Nguyen’s Kings, who raised the revolts against French protectorate, including Ham Nghi, Duy Tan and Thanh Thai, were all dethroned and exiled. Besides, there were many resistance movements such as Dong Du Movement (“Go East” Movement) led by Phan Boi Chau and Duy Tan Movement ("Modernization" Movement) led by Phan Chau Trinh. Resistance movements drew the attraction of patriotic members of the public but didn’t reach success. Under French administration, the traditional Chinese scripts or the Nom script in education were replaced by the Romanized alphabet of Vietnamese language (now called Vietnamese). In the early of 20th century, Vietnamese Nationalist Party was established under the influence of Three Principles of the People (Sun Zhongshan). As the failure of Yen Bai Revolt in 1930, Vietnamese Nationalist Party fell into recession and couldn’t work longer. In 1930, under the influence of Marxism, the Indochinese Communist Party was also founded by merging three parties: Communist parties; Annamese Communist Party and the Indochinese Communist Union. The Indochinese Communist Party was led by the General Secretary Tran Phu and Nguyen Ai Quoc (so-called Ho Chi Minh) – representative of the Communist International.

In 1940, Japan – one of the Axis, implemented a vast invasion in Vietnam, and made a deal with France to remain puppet French administration. In 1945, Japan held the control of all over Indochina and established the Empire of Vietnam with King Bao Dai’s puppet government, officially eliminated French Protectorate in Vietnam. As the failure of the Axis in the Second World War, Viet Minh (League for the Independence of Vietnam) led by Ho Chi Minh, started a campaign against Japan and gained control over the Tonkin. In August 1945, King Bao Dai abdicated, marked the end of Nguyen Dynasty. On 2nd September 1945, Ho Chi Minh proclaimed the Democratic Republic of Vietnam, affirmed the sovereignty as well as independence of Vietnam. In 1946, the Democratic Republic of Vietnam had the first general election and constitution.

According to the agreement of the Allies after the Second World War, Britain – a power of the Allies appointed France to disarm Japan in the Southern Vietnam. With the assistance from the US, France once again tried to reclaim control in the Northern Vietnam. However, the French could do nothing to retake the Tonkin as their schedule. After the failure in Dien Bien Phu Battle in 1954, the French were forced to sit at the negotiating table of Geneva Conference and make a compromise to end the war in Vietnam. Also in this conference, Vietnam was divided into two regions: the North and the South with the boundary was the 17th parallel. The North was governed by government of the Democratic Republic of Vietnam, developed in socialist direction. The South was under the domination of the Republic of Vietnam, puppet government of the US in Vietnam, and developed a market economy.

From 1954 to 1975, backed by the Democratic Republic of Vietnam, National Front for the Liberation of South Vietnam (NLF) was founded and started a resistance war agaisnt America. Diem’s administration of the Republic of Vietnam was confused by unexpected attacks from Viet Cong. As that status, the US had to make further intervention in Vietnam with the Strategic Hamlet Program and Special War Campaign (1961-1965), Gradual Escalation (1965-1967), Vietnamization (1968). Unfortunately, those all just made the US mired in Vietnam War. NLF’s operations in Tet Offensive (1968) and Ho Chi Minh Campaign (1975) ended Vietnam War after more than 30 years. On 30th April 1975, the Republic of Vietnam’s administration officially surrendered NLF.

Two regions of Vietnam were unified as one state: the Socialist Republic of Vietnam and started to reconstruct the country after war. Vietnamese government implemented a mass campaign of collectivization of farms and factories in the direction of socialism but it didn’t help Vietnam to recover as on paper. Vietnam’s economy faced an unexpected situation of stagnation and hyperinflation.

In 1979, Vietnam sent the troops to Cambodia; helped topple the Pol Pot government and establish the People's Republic of Kampuchea (PRK). On the pretext of Vietnam’s intervention in Cambodia, Chinese army attacked some southern provinces of Vietnam. The conflict made Vietnam - China relationship in tension and even led to the interruption of diplomatic relation between two countries.

Van Lang, the first feudal government of Vietnam was established in the period of Dong Son Culture, around 7th century BC - at the same time with Chu Dynasty in China. Van Lang Dynasty also can be...