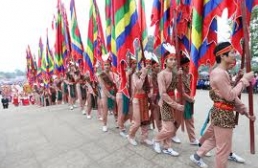 Van Lang, the first feudal government of Vietnam was established in the period of Dong Son Culture, around 7th century BC - at the same time with Chu Dynasty in China. Van Lang Dynasty also can be found in some articles with the name "Hong Bang Dynasty".

Civilians under that reign were Lac Viet people and led by the King Hung. King Hung was originally the head of a group of tribes. Legend has it that he was the eldest son of the Dragon Lord Lạc Long Quân and the Immortal Fairy Âu Cơ. Capital of the country was set in Phong Chau (Phu Tho Province now). The system of Van Lang government was very simple: the King Hung had the highest power, govern the country; at the lower position were his assistances. Under Hong Bang Dynasty, matriarchy was common in social living.

In the year of 218 B.C, Tan Dynasty in the north deployed a vast invasion to thesouth. In order to save the country, Lac Viet and Au Viet tribes collaborated and defeated the foreign invaders. The war ended, the leader of Au Viet tribal called himself as King An Duong Vuong, governed both Lac Viet and Au Viet tribes. The Kingdom of Au Lac (the name combined of “Au Viet” and “Lac Viet”), was officially formed. According to the order of King An Duong Vuong, Co Loa Citadel was built and become the capital as well as politic center of the country.

In 179 BC, the King of Nam Viet State in the north - Zhao Tuo, led his troop to the south and aimed at conquering Au Lac State. As intelligence operations, King An Duong Vuong lost his kingdom to Zhao Tuo. Since then, Vietnam had been set as a province and dominated by Chinese states. Vietnamese experienced a thousand years of Dark Age in the history as brutal policies of Chinese domination. Upon that long period, there were many revolts against wicked rulers such as the Trung Sisters, Lady Trieu and Ly Bi’s revolts. Unfortunately, those all didn’t reach success and independence for the country.

In 905, Khuc Thua Du and his force rose in revolt against the North’s domination. The revolt succeeded and gained autonomy for Vietnam. Under the reign of Khuc Dynasty, Vietnam was a vassal kingdom of China.

Till 938, with the great win in the battle against Southern Han on Bach Dang River, finally, Ngo Quyen released the country from a millenniumunder Chinese control. When the invaders left, Ngo Quyen declared himself as the King. However, Ngo Dynasty wasn’t lasted long as his dead in 944. Thus, Vietnam was once again in chaos. In the end of 967, Dinh Bo Linh succeeded in defeating twelve warlords and founded Dai Co Viet State (the Great Viet Land) as an independent nation along with the Chinese Song Dynasty. Dinh Bo Linh became the King of Dai Co Viet and ordered to build capital city in Hoa Lu (now is Ninh Binh Province). The name “Dai Co Viet” had used to call the country under Dinh Dynasty, Former Le Dynasty and Ly Dynasty. After the foundation of Ly Dynasty, Ly Cong Uan, so-called King Ly Thai To, had moved the capital from Hoa Lu to Thang Long (“Ascending Dragon”, now is Hanoi) and set up a monarchy. In 1054, King Ly Thanh Tong renamed the country as Dai Viet (the Great Viet). Under Ly Dynasty, Dai Viet was in full flourish and developed in all sectors (politics, economy and religion). Ly Dynasty released “Hinh thu” – the first document of law of Vietnam. This is also the period that Buddhism was wide-developed and many pagodas as well as temples were built in all regions of the country. Nowadays, One Pillar Pagoda is still remained as a historical relic as well as evidence of Buddhism under the reign of Ly. Also under Ly Dynasty, the first university of Vietnam, Van Mieu – Quoc Tu Giam (the Temple of Literature) was established as the order of King Ly Nhan Tong in 1076.

The state of Dai Viet had lasted for Ly Dynasty (1009-1225), Tran Dynasty (1226 - 1400), Ho Dynasty (1400 - 1407), Later Le Dynasty (1428 - 1527), Mac Dynasty (1527 - 1592), Trinh – Nguyen Lords (1533 - 1789) and Tay Son Dynasty (1778 - 1802). Under Tran Dynasty, Dai Viet was a wealthy country. Tran’s government paid attention to develop agriculture by improving cultivation and irrigation method. Foreign trade was developed with a commercial port system (including the ancient commercial port of Van Don and islands on Halong Bay such as Ngoc Vung, Van Hai and Cong Do Island). Trade relationship with neighboring countries like Indonesia, India, etc. was enhanced. But in the end of 14th century, Tran Dynasty fell into recession as serious corruption and lost the power to Ho Dynasty. Lasted for just 7 years, Ho Dynasty was ousted by Ming invaders in 1407. The revolt of Le Loi, with the assistance of Nguyen Trai, was regained the sovereignty for the country. By the power of the King, Kings of le Dynasty implemented land reform in order to recover the economy after the war. At that time, literature and science were developed with several famous people such as Ngo Si Lien, Nguyen Trai and Luong The Vinh. Le Dynastry also widened trade relationship with some European countries and Japan at commercial center of Thang Long and Hoi An. In 1527, Mac Dang Dung deposed King Le Chieu Tong and came to the throne. However, he faced an unexpected opposition of Le Dynasty’s generals. In the chaos, two powers in two regions of the country, Trinh Lords in the North and Nguyen Lords in the South, rose and fired a civil war. Dai Viet had been divided into two territories with Gianh River as the boundary for more than 200 years. In 1771, Nguyen Hue led Tay Son Revolt, deposed both Trinh Lords and Nguyen Lords. Country was unified; Nguyen Hue was called as King Quang Trung. After his dead in 1792, Tay Son Dynasty was in recession and ousted by Nguyen Anh, the heir of Nguyen Lords. Nguyen Anh founded a new state called Vietnam and declared himself as King Gia Long, marked the beginning of Nguyen Dynasty.

After 900 years of independence and following a period of disunity and rebellion, the French colonial era began during the 1858-83 period, when the French seized control of the nation, dividing it...