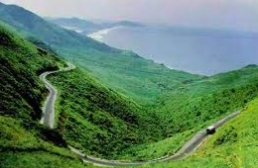 Vietnam's topography is very diverse with mountains, hills, plains, coasts and continental shelf. It's result of tectonic process in a long time of millions of years in the past. The topography is lower from the northwest to the southeast. Thus, almost the rivers in Vietnam have the stream following that direction.

In northeastern Vietnam, there are several mountain ranges (such as Song Gam, Ngan Son, Bac Son and Dong Trieu) forming the shape of a bow. In northwestern Vietnam, high mountains and highland are the dominant scenery. This region is also location of the highest mountain of Vietnam – Fansipan (3,143 meters high), which is dubbed "the Roof of Indochina". In the central of the Northern part of Vietnam is the Red River Delta, one of two biggest plains in Vietnam. The Central Vietnam has the largest difference in height between the east and the west. The west is featured with high mountain range of Truong Son and Tay Nguyen’s highlands, while the east has various small plains along the coast. In Southern Vietnam, topography is quite simple with Mekong Delta, the largest plain of Vietnam (or “Nine Dragon River Delta”). Mekong Delta covers an area of 40,000 square kilometers in total and is the main rice-cultivating area of Vietnam.

Vietnam is located in the southeast of Indochinese Peninsula and covers an area of more than 330,000 square kilometers (128,000 square miles). The country has the shape of letter "S" and lies...