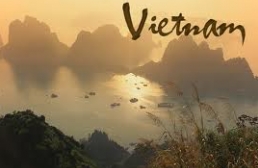 In the North, climate is tropical monsoon climate and has four distinct seasons including spring, summer, autumn and winter. Climate in the North shows continental character clearer than that in the South. When northeastern monsoon is active (from November to March), it’s the winter and the weather becomes cold and dry. The temperature is lowest in December and January. On some mountains in the North such as Sapa, Tam Dao, Hoang Lien Son, etc, it can down to 0°C and have snow.

In the South, climate is less affected by monsoon operations. Thus, tropical character is more typical than in the North with two separate seasons: dry season and rainy season. The temperature in the South is quite stable and remains high all year round.

Beside climate division from the North to the South, the climate also has differences between low and high areas as given structure of terrain. It was formed sub-climate regions like Sapa (Lao Cai Province), Da Lat (Lam Dong Province) with temperate climate.

The average temperature of Vietnam ranges from 21°C to 27°C, and increases from the North to the South. The average annual rainfall is from 1,500 – 2,000 mm and humidity is around 80%. As the impact of complex terrain, monsoon operation and the sea, Vietnam usually suffers extreme weather phenomena such as hurricanes, floods, droughts. Statistically, there about 6-10 storms and tropical depression landed in Vietnam each year.

Vietnam is located in the southeast of Indochinese Peninsula and covers an area of more than 330,000 square kilometers (128,000 square miles). The country has the shape of letter "S" and lies...

Vietnam's topography is very diverse with mountains, hills, plains, coasts and continental shelf. It's result of tectonic process in a long time of millions of years in the past. The topography is...