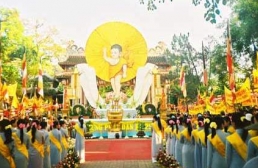 Buddhism is the main religion as well as the most long-standing religion in Vietnam. According to the statistics of the Government Committee for Religious Affairs in 2011, the number of Buddhists in Vietnam is around 10 million people and accounted for 7.93% of national population.

Buddhism had beenintroduced toVietnam since the early age of history (around 1st – 2nd century AD thank to Indian monks). In several fairy tales of Vietnam, the appearance of Buddha was recorded as a character called “But”, who represents the highest power and takes charge of helping the good and punishing the bad. At the beginning of Buddhism in Vietnam, Theravada ("The School of the Elders") played the dominant role. In 4th century, Mahayana ("The Great Vehicle") spread to Vietnam from China in Chinese Domination. For the Dark Age of over one millennium, Buddhism had existed in parallel with Taoism and Confucianism as “Triple religion”. Moreover, in period of Chinese Domination in Vietnam, Mahayana had been widely developed and strongly influenced by Taoism and Confucianism.

Under the reign of Ly Dynasty and Tran Dynasty, Buddhism flourished and reached the position of official religion in Vietnam. Variety of pagodas, temples were built; monks had high social status and received high respect of every people. Several Kings of Ly and Tran Dynasty were also Buddhists. Even King Tran Nhan Tong, after he abdicated, decided to be a monk and found Truc Lam Yen Tu Zen School.

After that, as the influence of the Western, Buddhism slowly lost its dominant role. It was not until 20th century that Buddhism got back to its position of main religion. Now, Buddhism is the religion that ranks 1st about the number of religious people in Vietnam.

In Vietnam, Christianity ranks the 2nd (just after Buddhism) about the number of religious people. As result of 2009 Population & Housing Census, there are around 5,677,000 people in Christianity and...

Caodaism is one of big religions in Vietnam with more than 1 million religious people, accounted for 1.01% of national population.

Beside three religions mentioned above, Vietnamese people also practice many other religions such as Hinduism (about 54,000 Hindus), Islam (about 63,000 Muslims), Judaism (with 300 Jews), etc.