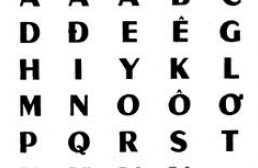 Along historical period, languages used in Vietnam have been changed to suit with administration and times. Officially, Chinese, Nom language, and alphabet Vietnamese are respectively used in communication and administration.

In around 1st century BC, after a vast invasion, Vietnam wasset under brutal Chinese domination. For about 1,000 years, aiming at turning Vietnamese people into Chinese people actually, classical Chinese language (so-called “Han” language or “Nho” language) had been used in school and government. When the Dark Age of Chinese domination ended, classical Chinese language had still remained its dominant position and become official language of Vietnamese royal court and mandarin examinations. Several important works in history and science by Confucian scholarswere documented in classical Chinese language such as “Dai Viet Su Ky Toan Thu” (Complete Annals of Great Viet) by scholar Le Van Huu, “Du Dia Chi” by scholar Nguyen Trai, etc. In 1070, Van Mieu – Quoc Tu Giam (the Temple of Literature) was built as a place to worship Confucius as well as teach Confucianism. Under the Later Le Dynasty (1428 - 1527), Confucianism reached the peak of prosperous period.

At the beginning of independent feudal era of Vietnam, Nom language (in Vietnamese: “Chu Nom”) emerged. Nom language was created by purely recording Vietnamese but borrowing some characters of Han language. Thus, Nom language is significantly influenced by Han language in script and literary style sector. It was not until 15th century that literature in Nom language flourished with many historic works such as “Quoc am thi tap” by scholar Nguyen Trai, “Hong Duc Quoc am thi tap” by King Le Thanh Tong, “Tale of Kieu” by poet Nguyen Du, and various Nom poems by poet Ho Xuan Huong, Doan Thi Diem, etc. Although Nom language had been used along with Han language for a long period, it hadn’t had the position of official language of the country. The exceptions are the short time of Ho Dynasty (15th century) and Tay Son Dynasty (18th century). At that time, all administrative documents were required to be written in Nom language.

In the feudal era of Vietnam's history, it had strict rules on costumes. Costumes in Vietnam are very diverse and show social hierarchy. Clothes of normal civilians were simple and even trivial in...

Social relationships in Vietnam are very complicated and strict as Oriental culture originally and influences of Confucianism in Chinese domination period. They now are less strict than in the past...