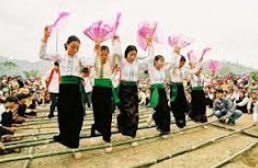 Vietnam is a multi-ethnic country with 54 ethnic groups, which have distinct languages, lifestyle and culture. Among them, ethnic Kinh (Viet) has the highest population (makes up 86.2% of national population). Residence of ethnic Kinh covers all the country but mainly concentrates in the plains, cities, and areas near by rivers.

Ethnic minorities (ethnic Tay, ethnic Nung, ethnic Thai, ethnic Hmong, ethnic Chinese, etc.) contribute only 13.8% of national population. They have lived in mountain and hill areas for many generations. Now, Vietnamese government is implementing equal ethnicpolicy with the fundamental principle: “Ethnic groups, regardless of their belonging to a majority or minority and through all levels of development, have equal rights and obligations in all domains of social life, which are ensured by the Constitution and the law”. Government also focuseson assisting ethnic groups in remote areas to developing economy and rising living standard.

According to the State of World Population Report 2010, Vietnam's population is about 89 million people, ranks 14th in the list of the most populous nations in the world.In the near future, Vietnam's...